This website uses cookies to improve your experience while you navigate through the website. Out of these, the cookies that are categorized as necessary are stored on your browser as they are essential for the working of basic functionalities of the website. We also use third-party cookies that help us analyze and understand how you use this website. These cookies will be stored in your browser only with your consent. You also have the option to opt-out of these cookies. But opting out of some of these cookies may affect your browsing experience.
Necessary Always Enabled
Necessary cookies are absolutely essential for the website to function properly. These cookies ensure basic functionalities and security features of the website, anonymously.
Functional
Functional cookies help to perform certain functionalities like sharing the content of the website on social media platforms, collect feedbacks, and other third-party features.
Performance
Performance cookies are used to understand and analyze the key performance indexes of the website which helps in delivering a better user experience for the visitors.
Analytics
Analytical cookies are used to understand how visitors interact with the website. These cookies help provide information on metrics the number of visitors, bounce rate, traffic source, etc.
Advertisement
Advertisement cookies are used to provide visitors with relevant ads and marketing campaigns. These cookies track visitors across websites and collect information to provide customized ads.
Others
Other uncategorized cookies are those that are being analyzed and have not been classified into a category as yet.
SAVE & ACCEPT
A NUMBER OF PROMOTIONS AT GRIFFIN CAPITAL PARTNERS

Monika Kaczmarska has so far worked as Vice President Finance in the financial department at Griffin Capital Partners. As Senior Vice President Finance, she will be responsible, among all, for overseeing the Group's companies implementation of the financial strategy, as well as the functioning of procedures, compliance and internal control. She is a specialist in finance. Previously, she was associated with Cornerstone Partners and Griffin Advisors. Monika graduated in corporate finance and accounting from the Kozminski University, political sciences from the University of Silesia, and Romance philology from the University of Wrocław. She is a sworn translator of French. After studies, she completed a five month long internship in the European Commission in Brussels.

Jędrzej Socha the current Vice President Investments in the investment department has been promoted to the position of Senior Vice President Investments and is now responsible, among all, for private equity projects and the development of the new PAD RES energy platform. Previously, as investment manager at PZU, he handled private debt and private equity investments. He has conducted a large number of LBO, leveraged finance and mezzanine transactions with both Polish and foreign entities. He was also responsible for the corporate governance of public and private companies, where he sat on supervisory boards. He worked in the investment banking department of mBank. Jędrzej Socha graduated from the Poznan University of Economics and Business and the Cranfield School of Management, and holds an ACCA Certificate.

Bartłomiej Bochenek is a specialist in corporate finance and investment. As Vice President Investments in the investment department at Griffin Capital Partners, he will be actively involved in developing new business opportunities in the real estate market incl. residential and office buildings in Poland and the CEE region. Since joining Griffin, Bartłomiej has participated, inter alia, in the acquisition of the Murapol Group by Griffin and Ares Management Corporation, and supported Echo Investment SA in the acquisition of a majority stake in Archicom SA. Bartłomiej Bochenek was among others engaged in the Griffin Property Finance fund, where he was responsible for mezzanine financing of two logistics projects with a GLA of nearly 200,000 sqm. Prior to joining Griffin, Bartłomiej gained his professional experience in the corporate finance team at the global advisory firm PwC. He is a graduate of the Warsaw School of Economics and has the title of a Chartered Financial Analyst (CFA).

Bartosz Sobota is a specialist in the areas of economy, finance and investment. He has a particular focus on financial modelling and analysis. As Vice President Investments in the investment department at Griffin Capital Partners, he will be responsible for the development of two investment platforms: Murapol Group – one of the most active residential developers in Poland – and Echo Investment – the biggest Polish developer in the office, commercial and residential real estate sector. During his career at Griffin, Bartosz has been involved in the company's numerous strategic transactions including, among all, the acquisition of the 98% stake in Murapol Group by Griffin and Ares Management Corporation. He was also part of the team responsible for the acquisition of a controlling stake in Echo Investment S.A. by WING, in which Griffin acted on behalf of its strategic partners and investors. Prior to joining Griffin, Bartosz worked in the Global Advisory Division at Rothschild & Co, one of the world’s largest independent financial advisory groups. He has excellent financial grounding, with a BA in Quantitative Methods in Economics from the Warsaw School of Economics, and an MSc in Finance and Investment from the Rotterdam School of Management.

Jan Niepiekło as Vice President Investments in the investment department at Griffin Capital Partners will be is responsible for private equity and real estate transactions. He has 7 years' experience in capital markets. Before joining Griffin he worked as an analyst at the private equity fund Bridgepoint, tasked with transaction analysis and portfolio management. Prior to this, he worked at an investment bank, Rothschild & Co, where he handled, among all, M&A transactions. Jan holds a degree in Finance and Accounting from the Warsaw School of Economics. Additionally, he is a graduate of the Institute of Philosophy of the University of Warsaw.

“Over the past 15 years, we have become the most dynamic and innovative investor not only in Poland, but also in entire Central and Eastern Europe. As our business grew, so did our team of experts – last year, we intensively developed both the investment and financial departments. However, the changes announced today are of a different nature. Five of our experienced and proven managers have been promoted to higher positions, taking on new tasks in line with the current strategy of Griffin Capital Partners that focuses on development in the areas of private equity and real estate,” said Nebil Senman, Managing Partner at Griffin Capital Partners.

“Griffin Capital Partners has an impressive portfolio, a clear vision and strategic plan that ensures significant value and returns to our investors. Our success has been possible thanks to our strong team of experts, who have invaluable knowledge and many years of experience in operations, capital investment and financing, as well as important transactions completed by us on the market. This is enormous capital and one of the most important factors driving Griffin's development,” said Maciej Dyjas, Managing Partner at Griffin Capital Partners. 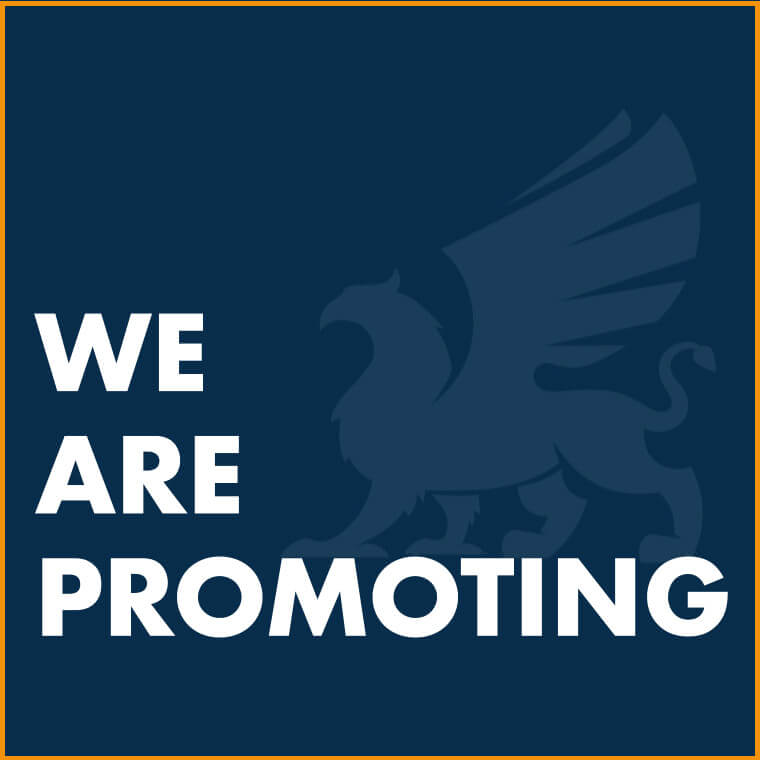 BACK TO NEWS
Read more news 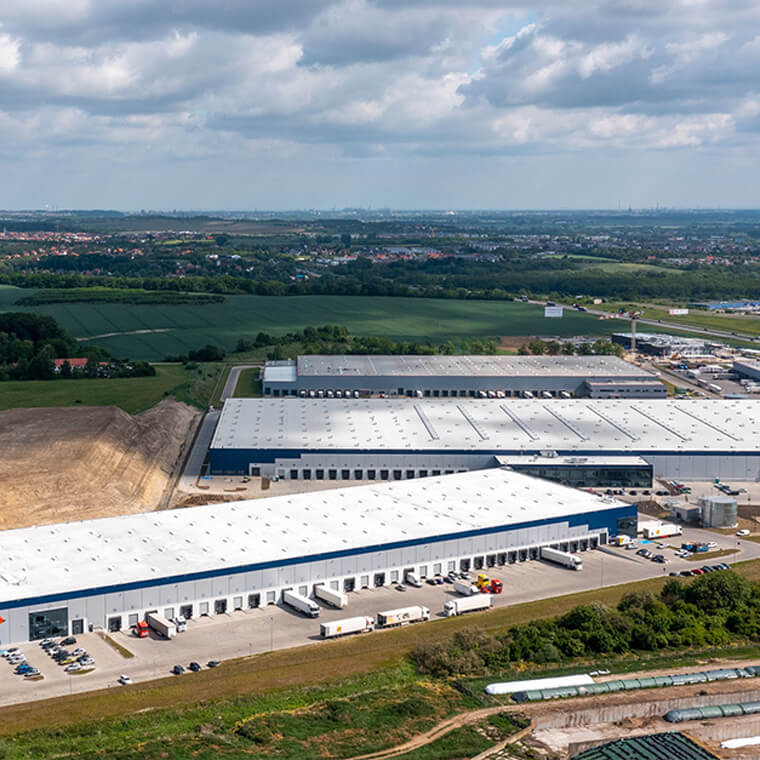 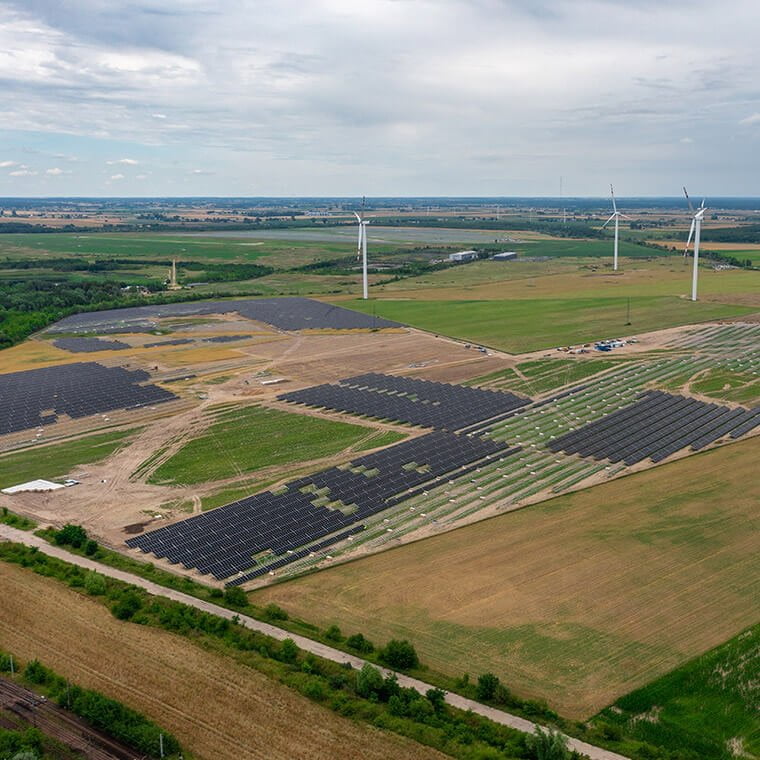 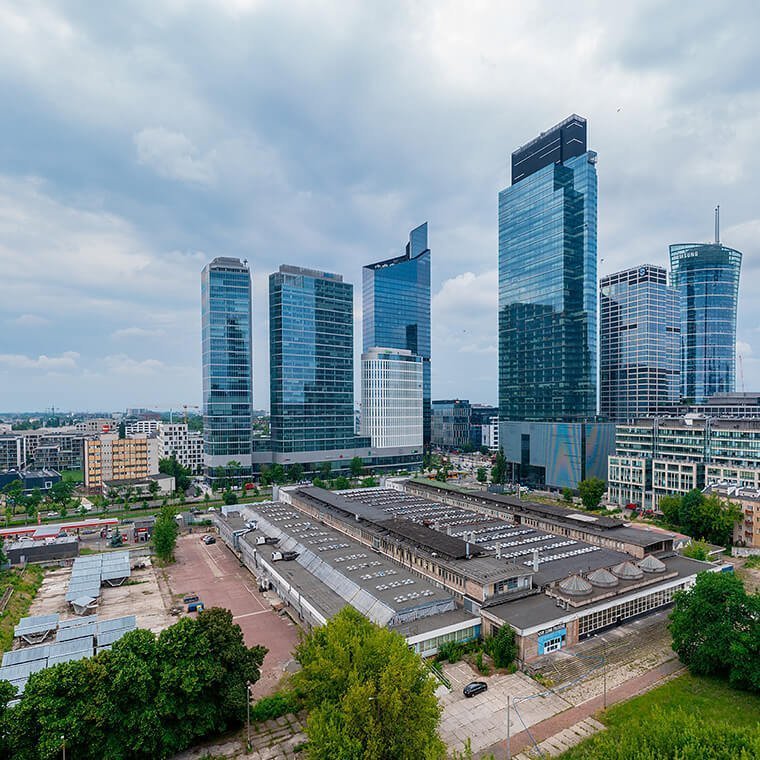 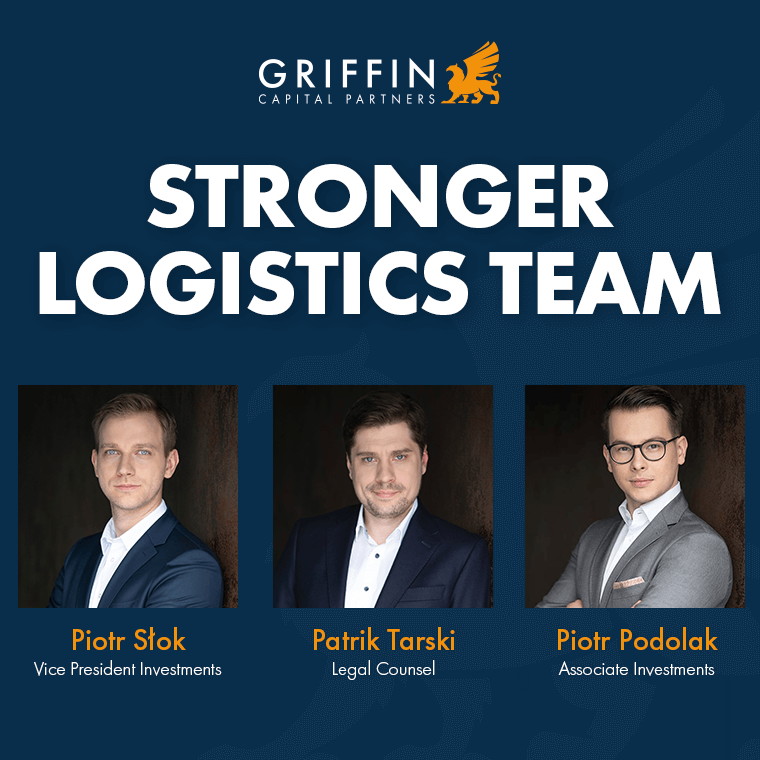 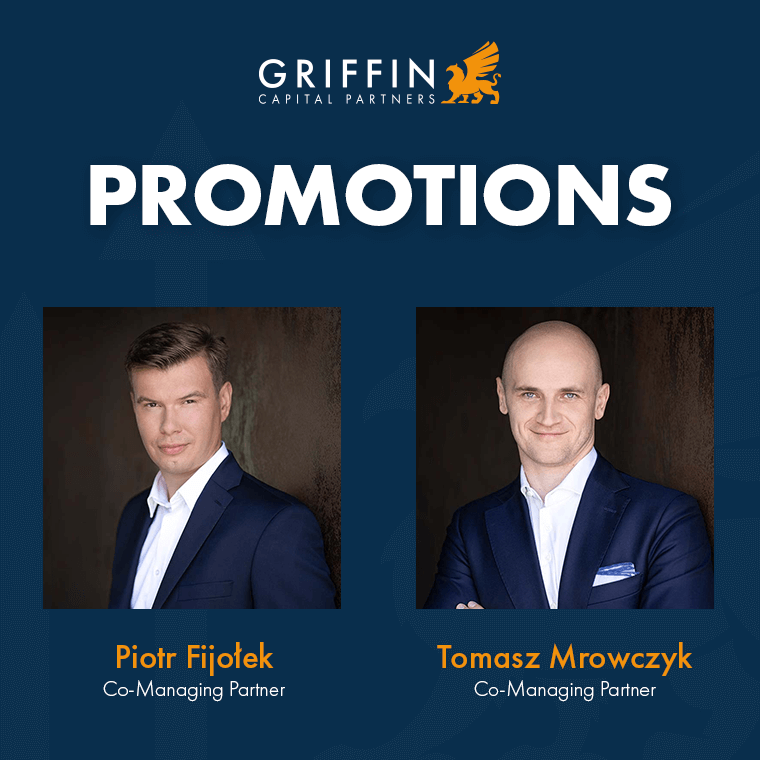 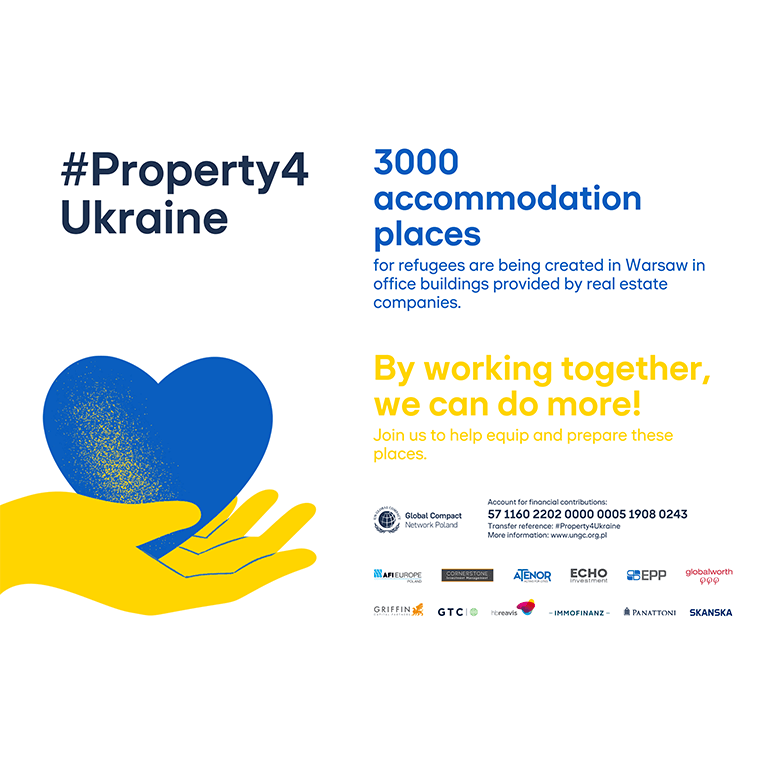 A NUMBER OF PROMOTIONS AT GRIFFIN CAPITAL PARTNERS 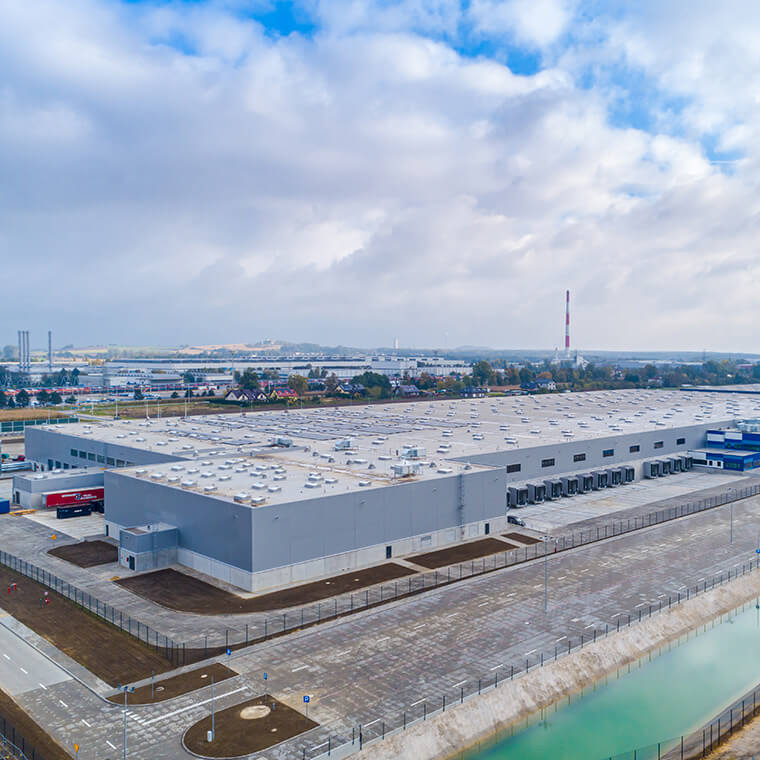 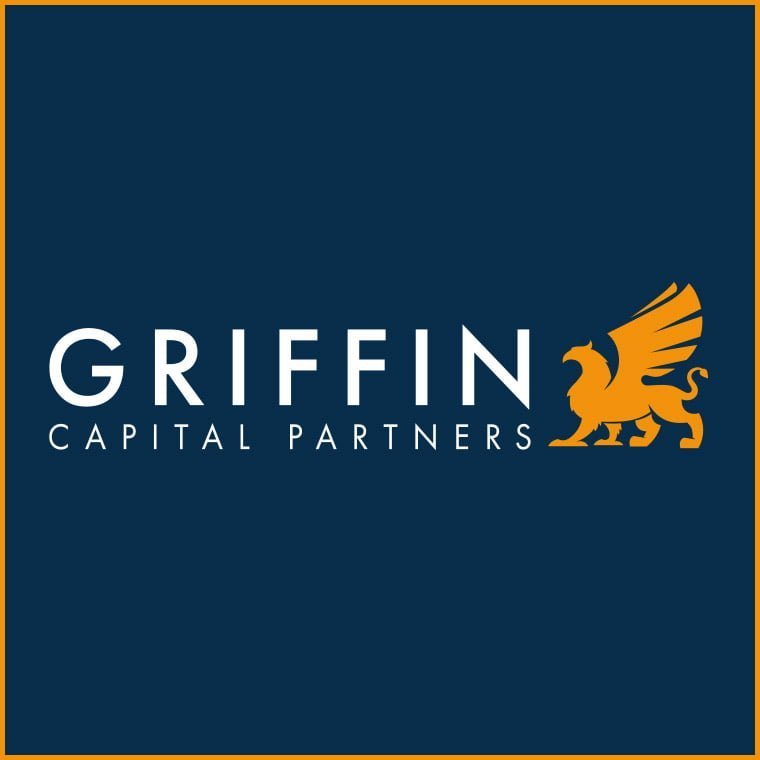